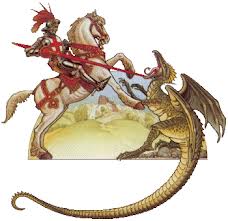 Today, if you didn’t know it, is St. George’s day. The patron saint of England who slew the dragon. Maybe its a fitting date then for Roundfire to actually set a publication date for The Last Observer? Yep, I awoke this morning to discover that it will be published on the 30th August 2013. It has its own page too with all the key details. The print book will retail at 6.99GBP or 12.95USD and the eBook at 6.99GBP or 9.99USD. I also have an author’s page there.

Gosh, wouldn’t it be nice if the book really did well!

Here are several endorsements. My sincere thanks to Herbie, Alan, Gordon and Anthony…

Dennis Wheatley brought up to date with a liberal spicing of speculation about the nature of reality, quantum physics and parallel worlds. This thriller novel is written by a practising occultist and it shows in the authenticity of every page. Highly recommended. ~ Herbie Brennan, New York Times best-selling author of Whisperers: The Secret History of the Spirit World.

The Last Observer is like the Devil Rides Out but on steroids. Magic and Science collide, dragging bookworm Stanley into a fast-paced adventure full of intriguing twists and turns and culminating in a battle over reality. Vasey combines ancient magic and quantum physics in a seamless picture of what reality might be and uses it as a theme to weave the devil of a story. It’s a gripping and thought provoking ride. ~ Alan Richardson, Author of Magical Kabbalah and many other books…

We all perceive reality differently, yet the evil Zeltan plans to control the universal consciousness. Because Stanley possesses a unique imagination, he is marked as another victim for the satanic tyrant. While fleeing from this threat, our innocent discovers his soul while Alison, dabbling in the occult, nearly loses hers. The author has created a convincing world of magic, quantum and mind-blowing ideas in which to set an endlessly surprising adventure. Along the way, enormous questions are being asked about how power should be used, whether it is scientific or magical. ~ Gordon Strong, Author of Merlin: Master of Magic and many other books.

Gary tells a classic tale of mystery and suspense but weaves within it a series of themes that would be at home in any modern physics text book. He masterfully uses his own extensive knowledge of modern magical rituals to create a tale that is both mysterious and intriguing. However the mystery soon gives way to something far more sinister and terrifying, a terror that explodes into a finale of epic proportions in which the fate of the universe itself is at stake. Once started this book cannot be put down and once finished you may just find yourself checking the shadows to catch a glimpse of the Lord of the Elements. ~ Anthony Peake, author of Is There Life After Death? The Extraordinary Science of What Happens When We Die and many other books.