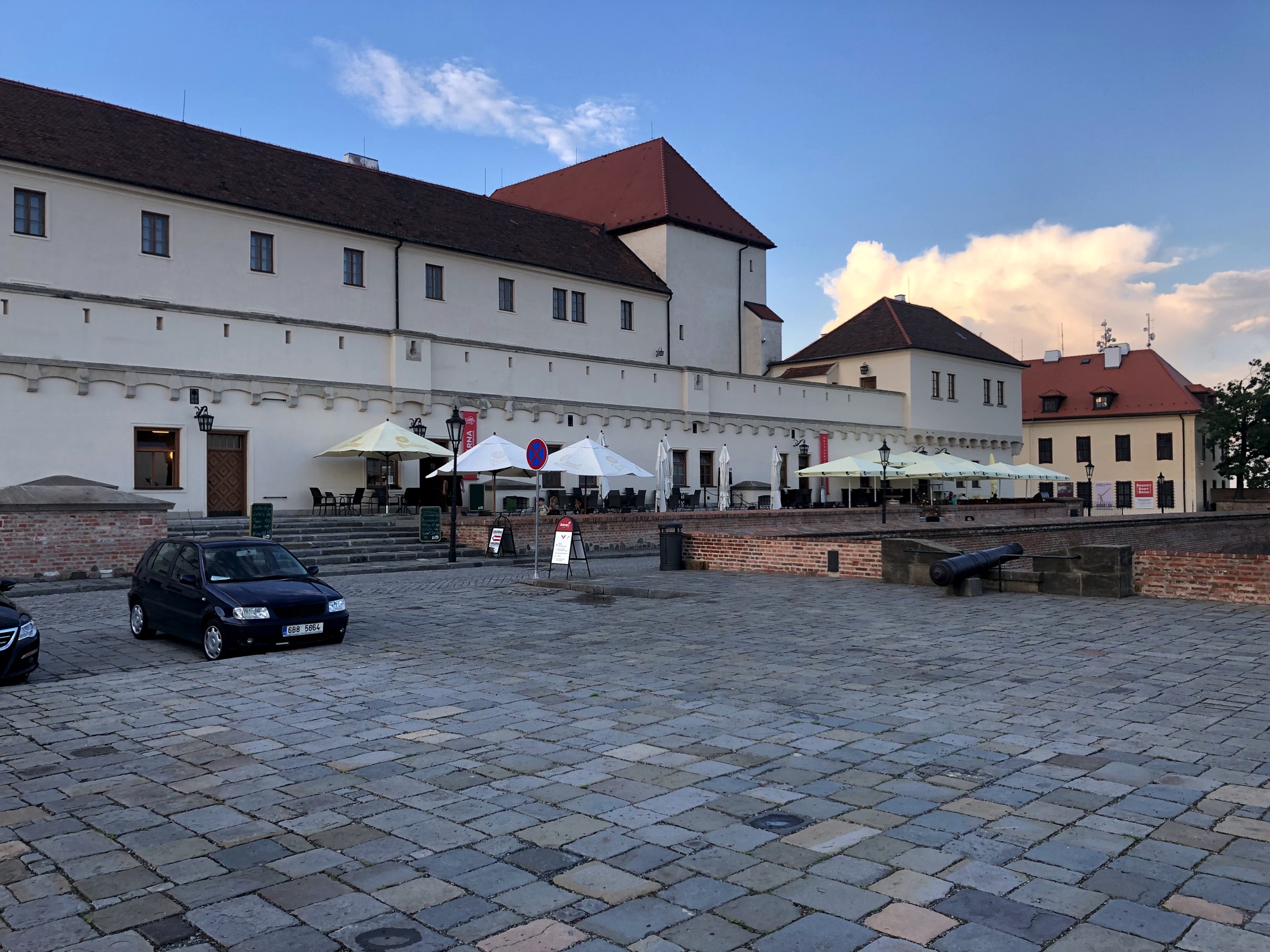 Right now, I am renting a nice apartment just outside of the city center literally on the side of the hill that is topped by Spilberk Castle. The Castle is set atop its own grounds and I often walk alone or with my daughter’s dog around the castle in meditation. Despite trying to research this geological and topographical feature, I have found little beyond the standard blurb about the Castle.

The castle was founded around the mid-13th century on a low (290 m), but relatively steep rocky hill, towering just above the historic city center (about 220 m). His master builder, Czech King Přemysl Otakar II, was generously conceived not only as a solid support of the ruling power, but also as a dignified seat of the rulers of Moravia.

The oldest written records of the existence of the castle relate to the years 1277 to 1279, which gradually remind the castle chapel, holding a parliament in its premises (January 1278) and finally the name of the hill, soon transferred to the castle itself.

However, the Czech rulers visited Špilberk only occasionally, which was true of the young Moravian margrave and later the Czech King Charles, whose first wife Blanka stayed here in 1337 after the forced departure from Prague.

Špilberk became a real settlement castle of the Moravian margraves only from the middle of the 14th century during the reign of Jan Jindřich (1350-1375) and his son Jošt (1375-1411). This period of only six decades of autonomous rule of the “Moravian” Luxemburgs, brother and nephew of Charles IV, is undoubtedly the most important and the most splendid, though little-known chapter in the history of Brno Castle. But after Jost’s death, during the last Luxembourg, Hungarian, Roman and later Czech King Sigismund and his son-in-law Albrecht of Austria, whom Sigismund in 1423 with the rule of Moravia and Špilberk castle, this castle has permanently lost its residential function and its military significance comes to the fore. He was fully manifested not only during the Hussite wars, but especially during the fighting between the Czech King George of Podebrady and Hungarian King Matthias Corvinus.

In 1469, however, Matthias Corvinus, supported by the city of Brno, after several months of siege managed to force the exhausted Czech garrison at Špilberk to leave under honest conditions and thus gain this important strategic point and subsequently the government in Moravia.

From the end of the 15th century not only the former importance of Špilberk declined significantly, but also its versatile decline and gradual deterioration. The leading royal castle in Moravia was rebuilt and the temporary holders did not care much about its maintenance. However, the Moravian Estates were well aware of the importance of the castle for the whole country and its capital, when in 1543 they stated that “the loss of this castle to the Czech and Moravian land would be bad, and especially the city of Brno would be destroyed”. In 1560, in order to prevent its intended sale into foreign hands, they preferred to buy Špilberk themselves (the “St Markgraviate”) and the whole estate themselves and then sold their own castle to the city of Brno. Špilberk remained in the ownership of the town for only sixty years – after the White Mountain defeat of the Estates Rebellion in 1620 he was Emperor Ferdinand II.

During the Thirty Years’ War, however, the castle fell into disrepair again, and even a relatively small military garrison of around 40 men did not suggest that Špilberk could play a more important military role.

However, everything changed with the partial military occupation of Moravia by the Swedish army and with two immediate threats to the Moravian metropolis in 1643-1645. The fortifications of the castle and the town were quickly repaired and improved. When, in 1645, Brno and Špilberk, under the command of Colonel Raduit de Souches, withstood the three-month conquest by a multiple Swedish superiority, the strategic importance of this castle proved again.

It was then – until the middle of the 18th century – rebuilt into the most powerful and also the most important Baroque fortress in Moravia, forming as a citadel with a fortified town one fortification system, which in 1742 became an insurmountable obstacle for the King of Prussia Frederick II. Špilberk military commanders also held the position of commanding generals in Moravia.

In 1783 the emperor Joseph II. on the conversion of the abolished fortified prison at Špilberk into a civilian prison for the most serious criminals. For imprisonment, the underused part of the local fortification system – casemates – was determined and modified. More than 200 prisoners used for heavy work on and off the fortress could be housed in their bulk cells. Since the mid-1890s, however, prisoners who can be described as political have begun to appear in the above-ground premises of the Spilberk fortress. In addition to several major French revolutionaries captured during the coalition wars with France – the best known of them was former postmaster Jean B. Drouet – it was above all a 15-member group of the so-called Hungarian Jacobins, led by writer Ferenc Kazinczy. More than a quarter of a century later (since.

The poet Silvio Pellico, who had been here involuntarily for eight full years, then made the Spilberg prison all over Europe famous for his book “My Dungeons”.

By this time, Špilberk had ceased to be a significant military fortress, and from the imperial decision remained only a large civilian prison. This change was mainly caused by the French army of Emperor Napoleon, who, when leaving the occupied Brno in the autumn of 1809 destroyed some important parts of the Spilbers fortifications. The last large “national” group of political prisoners in Špilberk was represented by almost 200 Polish revolutionaries, in particular the participants of the so-called Krakow Uprising of 1846. In 1855 Emperor Franz Joseph I abolished Spilberg prison and after the last prisoners left three years later military barracks, which they stayed for another hundred years.

Twice, however, Špilberk re-entered the general awareness as a place of suffering and freedom. For the first time in the years of the First World War, when in addition to the guilty soldiers were also imprisoned civilian opponents of the Austrian regime, the second and much more markedly in the first year of the Nazi occupation of Czechoslovakia. At that time several thousand Czech patriots suffered in the Špilbers’ walls, some of them found death here. For most, however, Špilberk was only a transfer station to other German prisons or concentration camps. In 1939-1941, the German army made extensive adjustments to Špilberk to create a model barracks in the romantic-historicizing spirit of the then Great German ideology.

In 1959 Špilberk left the Czechoslovak army and finally ended its military era. The following year, Špilberk became the seat of the Brno City Museum.

Such a hill must have a longer history but I have yet to find it…… There is a second hill in Brno which is occupied by the Church of St. Peter and St. Paul and its twin spires. The castle and the church gives the city skyline a unique look.

The Castle grounds are surrounded by many pathways leading up and down and around the structure. The views of the surrounding city are also quite stunning.

A view of Spilberk Castle.

Waterfall and pond beside Spilberk Castle

Another view of the Castle

St. Peter and St. Paul’s through the trees

In early summer, I will be moving to my own new apartment out in Brno Bohunice. There will be no such views or walks nearby (at least that I am currently aware of) so I must make the most of this magnificent landscape while I am able. It will be replaced by a view of a communist era high-rise housing estate unfortunately! (It’s still a nice location though I hasten to add).

It seems to me that such a hill as the one the castle sits atop of must have been a place of fortresses and habitation long before the 1100’s though, as yet, I have found no evidence to indicate that it was. I will keep searching.

One thing I do know is that the Castle was often used as a prison. During the communist era, one unfortunate prisoner here was the Czech magician Frantisek Bardon. Bardon in fact, died in imprisonment in the castle……He is buried in his home town of Opava and a couple of year’s ago, I visited his grave and place of birth.