During the summer, I spent a magical weekend with friends Sue Vincent and Stuart France… Here is Sue’s account of a small part of that weekend and a lot of fun trying to make music from a rock….

Way back when the world was warm and the sun remembered to shine, our friend, Gary Vasey, came over from the Czech Republic for a weekend. It was to be our second meeting in the going-on-fifteen-years that we have been close friends, and it was a memorable one for a good many reasons. We wanted to share some of the places that had played such important roles in The Initiate, the first of the books Stuart and I wrote together, which Gary had called “a work of brilliance“, sharing our excitement in the journey. So we took him, amongst other places, to Uffington, and while we were in the area, we finally managed to find the Blowing Stone.

We had tried to run it to earth on several occasions but had succeeded only in finding the pub that bears its name and likeness, where we seemed to recall the stone should be… but it was not there. This time, however, we turned away from Kingston Lisle at the crossroads and immediately spotted the shy little sarsen stone, hiding in a cottage garden. The cottage used to be the old Blowingstone Inn, but now it sits quietly, away from the village, waiting for those who would seek out its secrets. 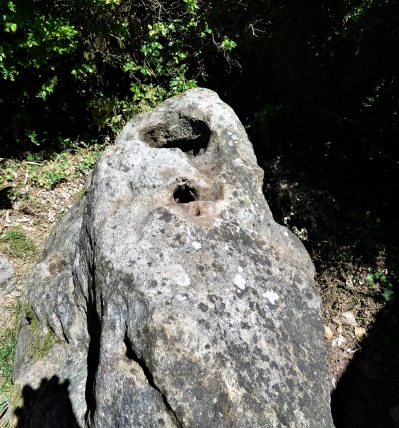 It doesn’t look much, at first glance… just a small lump of rock by the roadside…. but between legend, function, and history, it has a lot to say for itself. It was once called the King Stone and although there is speculation that it may have stood on White Horse Hill, near the ancient hill figure that has watched over the valley for thousands of years, being moved to this spot in the mid-nineteenth century, the legends suggest that it has always stood at a distance from that place. It may have been called the King Stone because the Saxon King Alfred used it to summon his army  to fight the Danes at Ashdown in 871, but I think it is more likely to have something to do with the rituals of kingmaking; for the legends tell that he who sounds the stone, making it heard on White Horse Hill, miles away, will be King of England.

The remainder of the article at Sue Vincent’s Blog