From Inner Journeys: Explorations of the Soul, Thoth (2005)

In one meditation session I envisioned a useful analogy for this. I saw each individual as a personal computer. The PC is switched on and sparks to life with no memory of its last use. Its operating system runs local programs and it is unaware of the network of other PCs that it belongs to and knows nothing of the central server computer. When the PC is switched off, it dies. It will be reborn booting up a bunch of background programs when it is switched on again but it has no memory of a past existence. It is only when the user clicks on the “My Network” button that access to the network and central server occurs and suddenly the PC is no longer alone. It is sending instructions to the server for processing there and receiving input and instruction back from that server. The PC thinks it’s an independent entity but it is really a part of a vast computing network. It is a part of the one thing.

Meditation and instruction eventually leads to a similar conclusion. It breaks down our pre-conceptions bit by bit and sometimes in a single massive ‘peak’ experience and the impact of this imperceptibly changes everything about the student. The ego is recognized for what it is and the other aspects of the whole ‘me’ begin to get the recognition that they deserve.

The Tower Tarot card is isolated on a rocky mountain top. It is alone and isolated; aware of only itself. The Tower seems to have a whole bunch of water spouts at its base and water is flowing out of it in torrents. There was a moss growing around those holes and the water that emerged from them is clear and cold. I heard a voice say ‘the clear waters of consciousness are eroding the base of the Tower’. The Tower represents the ego and its views. It feels that it is alone and it is a defensive structure. But as the waters of consciousness flow through and around the Tower, they are slowly eroding its foundations and at some point, it will fall. 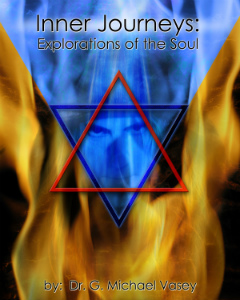