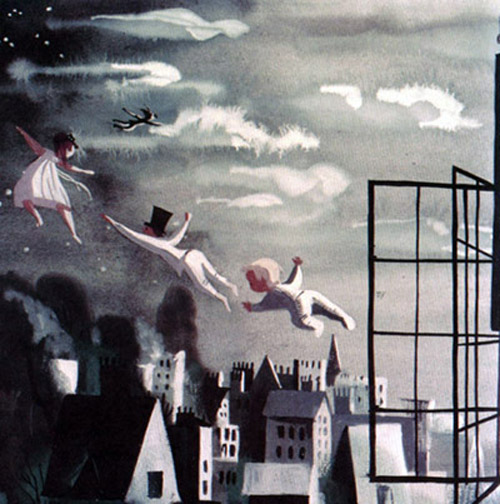 “The moment you doubt whether you can fly, you cease for ever to be able to do it.”
― J.M. Barrie, Peter Pan

I posted this quote on Facebook last night on the Last Observer page. For a novel about the nature of reality and magic, it struck me as a darn fine quote. Magic really does involve belief or faith. Faith really can move mountains. Magic rituals, far from being some evil activity performed naked with the lights out, are simply a very traditional human activity designed to help act out and therefore convince the subconscious and other areas of the psyche, that something is so. That, if you like, we can still fly. I discuss this in Inner Journeys where I use the example of projecting success and being successful as a result. A Rolex watch could be used to help convey the idea of success and it is, in this context, a magical instrument.

The quote though, reminded me of something I had written on Asteroth’s Domain a while ago. The blog article was titled Imagining and it deals with a memory of being very young and able to imagine things into reality. A sense that at some point I existed in a real place but fall back into this dreamworld on waking bringing a very real sense of disappointment. In this ‘Otherworld, whatever I imagine can be my reality. In this place, I can fly. The fact is, I am pretty convinced that I could fly but at some point growing up, I was laughed at and told, “don’t be silly, people can’t fly!” At that moment, I lost my ability to fly. At that moment, I lost something else far more important. I lost my belief in magic and I lost my childhood.

Don’t get me wrong, I am not blaming anyone for this. It is the world we live in and what would it be to think I could fly at my age? Well, guess what? There are moments when the magic is still there. When dragons still exist and Unicorns roam and yes, I can fly. They exist on that point between waking and sleep and who is to say that this is reality and not just imagination or that its really the other way around?